A Saga of Success 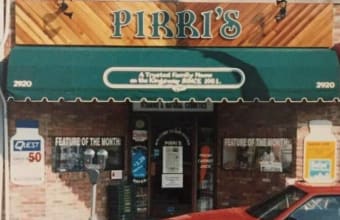 Peerless Pirri's - A Saga of Success appeared as a retailer profile in the February 1995 Edition of Natural Health Products Report, written by Karen Schultz.

Vito Pirri has been in the forefront of trends I the food retailing business for 24 years, a journey which has taken him from produce markets to natural foods. The transition, sometimes smooth, at other times rocky, mirrors trends in the natural health products industry. Pirri cut his teeth in the family produce business his father had started in 1951, the first of five open-air fruit markets in Toronto. After working for his dad and a family friend, he opened his first store in 1971, a 2,500 sq. ft. Produce market on Browns Line called Pirri's Harvest Caravan, which he sold in 1980. Business was great, so in 1975 he opened another store, Pirri's Meadowvale Farms Market at Derry Road and Hwy 10 in Mississauga, a huge 10,000 sq. ft.-facility.

Again the focus was on produce but the store also included a garden Centre. In one of those curious twists of fate, a family friend Vince Pulla, now owner of Johnvince Foods, convinced him to go back to the basics and sell bulk foods: customers could get as much as they wanted without paying for the expensive packaging. Pirri was Pulla's first customer and he supplied him with bulk foods.

"We were the original bulk foods store in Canada", said Pirri. "It was a totally natural way of selling and merchandising and we did a tremendous volume."

When his customers started asking for natural foods, Pirri started bringing in natural products, an area he admits he new very little about. "I looked up the names of natural food distributors in the yellow pages and there was one. I met with them and started carrying their products. On their recommendation I started advertising in the ethnic press and soon the business was growing in leaps and bounds."

A born risk taker, Pirri decided to pull out all the stops and started a three-week advertising blitz on CFRB-AM radio. The ads not only drew in new customers to this remote location, but also attracted suppliers. Witnessing the power of advertising in action, he became a convert and extended his media campaigns to include other local radio and community newspapers.
The business took off and the fruit market with annual sales of $600,000 turned into a natural food business in excess of $1.2 million in one year. The change in focus was reflected in the change of name to Pirri's Natural Food Markets and Pirri found he had from produce to bulk foods to natural foods.

Not just content with natural foods and answering the call of his customers, he got into hair, founding The International Hair Clinic. But not just any hair clinic: using his natural foods background, the clinic provided a whole system of hair management from nutritional through to hair products and natural cosmetics. This business was later sold in 1986. With three stores and a hair clinic behind him, Pirri met his Waterloo in Niagara Falls, with opening yet another store, Pirri's Natural Food Emporium. Admitting to slipshod market analysis, the store lost close to $.5 million in one year. To stem the red ink, he closed the store, sold off all existing locations with the exception of Pirri's Natural Foods, and mortgaged his home to pay off his creditors. By 1988 he was finally solvent and essentially starting where he was 17 years previously.

In 1993, he moved Pirri's to a new 4,500 sq. ft. Location on Ontario Street, and the focus of the store changed. Previously 60% of the store was bulk, 25% in supplements and the remainder in natural foods. In the new store 54% of the stock was in supplements, 35% in bulk and 25% in grocery and dairy. The store staffed by a complement of 15 people, 9 full-time and 6 part-time. The next year, Pirri was back in Toronto with a new 1,000 sq. ft. Store, Pirri's House of Vitamins & Natural Cosmetics on the Kingsway. Hoping to capitalize on the trend towards supplements, this store was stocked with the latest in supplements and cosmetics.

(Around 80% of stock is supplements, 15% in cosmetics and 5% in water, juice bar and snack items.) Pirri went after the professional market, hiring naturopathic students fro the nearby Canadian Naturopathic College to work part time and having staff in white lab coats. He perceives that the students with their knowledge of natural therapies add valuable expertise especially when dealing with health professionals. This was to be the first in a chain of nutrition centre type stores throughout the metro region.

The store however, didn't take off as anticipated. Sales were off the projection targeted. Pirri forever a realist and firm believer in giving customers what they want revised his plans. "I had to quickly realign the product mix in the store and shipped the excess stock off to St. Catharines." said Pirri. I anticipated doing $1.5 million in sales in vitamins, no5$.5 million. "We survived because we were able to sell the product in our other store." The store realized a profit that year and projected sales for 1995 are $800.000.

To stay on top, Pirri advertises on local radio and in print. He also encourages professional development by paying for any courses on natural health subjects that his staff wish to attend.

Today you have to compete from a knowledge Perspective. You have to know the products, people, tastes, their buying habits, price points etc. Competition is tougher today than it was when I started. There is competition from the mass market, other health food stores, pharmacies etc. People are also aware of what is available and the price of the products. " If you’re not right on price, you can't make sales," he said.

These days Pirri, never one to sit still, is already into other projects. He exemplifies the entrepreneurial spirit: a pioneer, an innovator, a fighter and a businessman with an unshakable desire to meet the needs of his customers.