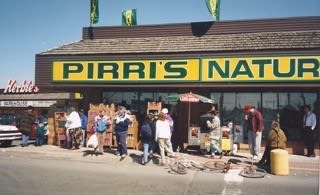 This article was written by Molly Harding, appearing in the March 20, 1996 edition of Business Today in the St. Catharines Standard.

Because of Vito Pirri’s three hats, Canadians may well be facing a much healthier future.

Pirri’s has gone from a mainly bulk food store in St. Catharines in 1981 that stocked a few natural foods, cosmetics and vitamin products (his retail hat), to a store whose key focus is now on natural products.

The store’s image changed as the consumer became more concerned about health problems openly associated with the use of chemicals in our foods and daily living.

“In the first five years, people were already becoming more knowledgeable about the benefits of using natural products,” says Pirri. “ No one had brought it to the front like we did. We made natural products ordinary. We were known in Niagara---

Pirri’s is family owned and operated. It is a safe place for people to come into. We give personal service and gave the business an anchor.”

Vito brought in professionals to talk to his customers about their health needs. Naturopaths and doctors appeared regularly in seminars at the Parkway Complex or Howard Johnsons, sponsored by Pirri’s. Authors came into the store to speak on nutrition. (Pirri’s now have access to some 2,000 books).

Seeking knowledge, Pirri traveled all over the world, and became involved in the events and operation of the Canadian Health ProductsAssociation. He has know been elected to the board of directors of that association (his national hat)

In his office at the store on Ontario Street, recently renovated, with an enlarged supplement department and grocery department, Pirri’s talks of his latest move, (a third hat) in direct response to the problems he encountered as a retailer with product availability.

He started a national distributorship called Harvester Natural Products, already putting products into many of the leading supermarkets in Canada, the United States and Europe., 3,800 natural food products, cosmetics and vitamin products.

As he and his wife, Susan, and son Frank, manager of the St. Catharines store, finalize plans for the 15th anniversary celebration March 27 through April 3rd, he looks back at those early days in a small store next to K-Mart. (A younger son Michael, and daughter Sabrina are also involved in the business now).

People now came to know Pirri’s mainly as a bulk food store, where they had freedom to scoop from huge bins just the quantities they needed.

The natural products section grew as people’s awareness of their benefits increased. The consumer started reading labels, and rejecting foods with harmful or questionable chemical contact. More and more of the natural product became the preferred one.

Distributors visited St. Catharines only every couple of weeks, Pirri’s says. Customers were constantly disappointed because their orders were never on time.

“As a retailer, I was being victimized by distributors, who didn’t have to face my customers to explain,” he says. “That’s when I decided to become a distributor myself.”

Harvester Natural Products delivers twice a week to St. Catharines. As a distributor he knows what the retailer wants.

Through Harvester he is stocking his own shelves with the very latest of products new to Canadian retailers, and those of such stores as Big V, Loblaw’s, Shoppers Drug Mart, Commisso’s Food Terminal and Fortino’s---- he has products in 18 Fortino stores and a whole department in the latest Fortino’s, Burlington location.

We’re bringing good health to the masses, creating awareness and looking at the wellbeing of the whole person.

Pirri’s have a nutri-health data system that can give dietary analyses, telling a person what foods should be avoided and what retained in the diet, what herbal and homeopathic preparations to use.

“We have to look moe ways towards building up immunity (to modern diseases) in our systems,” says Pirri, adding people have such a desperate need to know what kind of physical shape they’re in.

Pirri’s is one of the most complete natural food stores in Canada, with one of the largest selections of homeopathic and herbal remedies. It has also invested heavily in equipnment for distilling water----“It’s pure water, far better than spring water.” Pirri says.

They have started a vitamin club, where after buying 10 products, customers get the 11th product of their choice. Senior’s get a 5% discount every day, and a 10% discount on Tuesdays.

With a reduced portion of their business now bulk foods, Pirri is keying in certain areas in the natural grocery section, with items that are low fat, salt free or low sodium, gluten or lactose free. There are special foods for those with specific conditions, such as diabetics, celiac and those with lactose intolerance.

On March 28th to 30th, during the anniversary open house, customers will be treated to sampling and specials and welcome as openhearted as the Pirri Family.