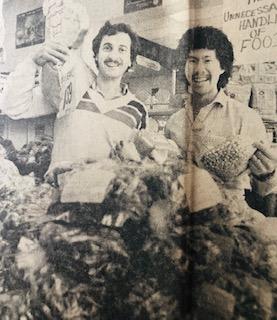 Written by Doreen Martens for the St. Catharines Standard in October 29, 1982.

Sacks of gourmet jelly beans, flour and peanuts are some of the staples at Pirri’s, where partners Vito Pirri left, and George Chow, find lots to smile about. The Toronto-born businessmen have carved out their own market in St. Catharines with a combination of advertising, imaginative stock and personal service.

“We sometimes joke with customers and tell them we’re brothers,” says Vito.

Now, to their Toronto friends, Vito & George didn’t seem too bright. After all, they decided to try out their new idea in one of the worst spots you can imagine: St. Catharines.

Not only was St. Catharines economically depressed; it was also not the trendy kind of place where their idea might stand a chance.

But Vito and George went ahead with their plans, and plunked themselves and their new business down in the middle of the K-Mart plaza on Ontario Street.

Lo and behold, a year and a half later their idea has boomed into a successful business. Needless to say, Vito and George plan to live happily and prosperously ever after.

It appears that St. Catharines residents have taken the business to their hearts, and according to partners Vito Pirri and George Chow, customers are coming from as far away as the United States to sample the goods the store offers, which range from books on herbal medicine using herbs, to chocolate pizza (With cashew nut “shrimps” and butterscotch cheese”).

Market wholesalers now say Pirri’s is the largest-volume natural food business in the country. Vito shrugs modestly when telling the visitor that, but it’s obvious that first-year sales of more than $1.5 million have both partners looking forward to a bright future.

Three weeks ago, they opened a second store on Bunting Road, and they are hoping to move into the south end soon. After that, it’s Niagara Falls, Welland and Thorold and on through the peninsula, and maybe even Hamilton.

In short, Pirri’s is a success story at a time bankruptcy stories are much more common.

The secret, according to Vito, was good market research, and a little of that quality some call “chutzpah”.

The Pirri family has been involved in the produce business in Toronto almost since the turn of the century, and it was through running a produce stores there that Vito began to realize there was a market for health food products. We’d get health food shoppers coming in and saying, “Gee you’ve got wheat germ, yet you don’t have vitamins and natural products”.

But the traditional health food store (and there are several in the Niagara area) didn’t seem to be reaching the larger market. In fact, only five per cent of Canadians were patronizing such stores.

“There seemed to be a phobia that existed about ‘health’. For years, people wouldn’t go into health food stores” says Vito.

“Our idea is that each person out there is a potential client of ours, but were not going to get them in here with a big sign that says ‘health food’ because that scares them off.

Vito and George (who got his start working in a produce store when he was 13), joined forces and at Vito’s suggestion, did some research on the natural foods market, exploring centres in Europe and California for other approaches to the business.What they came up with would make any health food purest cringe: a paying combination of health food and so-called junk food.

If you want cheery flavoured cherry chips or scandalously red glazed cherries, they are on one side of the store: if you want Aloe Vera shampoo or herbal teas, they’re on the other. In between is a fascinating bulk food section, which carries as many as 973 items at a time. Next door, meanwhile, is Harvest Caravan, a European style fruit market run by Vito’s sister, and her husband Frank Santopietro, along with in-laws Sylvia and Phil Trigiani. Together, they give to natural foods what partners call a “ supermarket image”

Such stores, often on a grand scale, are already a common sight in the trendier parts of California, but how did they end up in St. Catharines?

According to Vito, it was because the Niagara market was ripe for it: local residents, he says, are every bit as diverse and demanding as people in larger centres.

They are the kind of people who like the idea of being able to find 20 different types of flour under one roof, for example --- chestnut, amaranth, chic pea flours, items that appeal to certain ethnic tastes.

“There is a cross-section of people in St. Catharines, Nationally-wise it has as much variety as Toronto has. I think the pace is slower in this city, but the needs are the same,” he says.“ The unfortunate thing is, nobody had ever chanced coming into this area.”

High unemployment and the dominance of the depressed auto industry has potential investors away from the Niagara market, the partners say, and in fact the end of a strike threat of General Motors was what spurred them into going ahead with plans for a second store.

But the accessibility of Buffalo, U.S customers, has helped business, too, particularly in the area of “prescription” foods.

For people on special diets --- those with severe allergies to wheat, milk, for example--- being able to eat anything resembling a balanced diet traditionally involved long trips to Toronto and other large cities.

Pirri’s claim to have a wider variety of special diet products than Toronto General Hospital, which runs an outlet expressly for people who need such items.

It’s all part of the “personal touch” the partners want their business to retain. You don’t have to be a special-diet person to request a unique item. If they can get it for you, the partners will do it, even if it’s something obscure like Yugoslavian forest honey.“ There is always that one percent who will walk into a store and know what it is --- and we have it!” says Vito.

The product line has been built not only on what is available, but also on what has ben requested. So, that Bahamian immigrant longing for pigeon peas (a staple back home) can get them at Pirri’s, and that East Indian native can get that special kind of rice.

The variety helps make shopping more fun, says Vito, who enjoys watching a woman drag her husband into the store after discovering this or that novelty item. Next thing you know, Charlie’s in here too, and they’re calling each other from different parts of the store: Hey, come here and look at this!”

Bulk foods in open barrels have always been a big draw, but now that large grocery chains are getting into that line, Pirri’s have tried a new angle --- bulk packaging in variable sizes which eliminate sanitation problems but still provide flexibility and low prices.

There’s a method to all this madness, says George, who in addition to holding a degree in economics and political science is now studying to become a master herbalist --- an expert on herbs.

Even if rainbow-coloured coconut offends health food purists, items like it help to create a market for the more unfamiliar “natural” products by drawing people into the store and arousing their curiosity.

Although some customers still only come in for the specialty or “junk food” items, he says. “Slowly were picking up more customers who are interested in the health food lines.”

Nobody can change their lifestyle habits at the drop of a hat, George points out, and fanaticism of any sort isn’t good for you.” We are now creating a greater awareness in people in how to eat better for health, but that awareness can’t happen overnight.” Even so, the partners seem to be carving out a market that’s all their own.