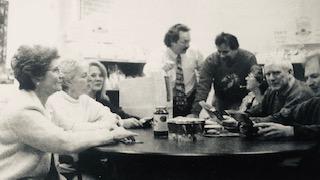 When looking at trendsetters in the natural health products industry, few are better known or more closely watched than Vito Pirri. Known for introducing innovative ideas and blessed with the boundless energy to make it happen, Pirri is inevitably in the forefront of new developments in the industry, as in 1995 when Pirri’s House of vitamins in Toronto, was profiled in this magazine. Since then, he has made the leap from retailer to distributor with the opening of Harvester Natural Foods in 1995, which is quickly becoming one of the major players in Canadian health food distribution.

Pirri is no stranger to the food business. His retail experience of over 25-years spans the development of the health foods industry in Canada. Starting out in the family produce business, then as owner of a bulk food store and finally ending up retailing natural foods, Pirri knows the industry inside out. Realizing that natural foods were the wave of the future, Pirri was not just content to remain in retail. The move to becoming a distributor with the establishment of Harvester Natural Foods and marketing his own brand, Nature’s Impulse, was the place to be. “I estimate that 95 percent of people do not shop in health food stores,” Pirri said. “My goal is to expose natural health products to that 95 percent.

Having a vision of where the industry was going and what he wanted to do, Pirri began to look for a financial backing, preferably from someone who had the same foresight and commitment to the natural foods industry. He found that canny partner in Joe Pulla of Johnvince Foods. Not only did Pullahave the distribution network in place, he was also able to process and co-pack food products and had the necessary financial wisards, lawyers and computer experts on staff, the internal infrastructure needed to grow a company. Pirri was on his way to realizing his goal of making Harvester the number one natural food distributor in Canada. In the short year and a half since the company’s launch it had grown from 6 to 15 staff and Nature’s Impulse line is now a recognized brand coast to coast. “I’ve been fortunate in that I have some of the best people in the industry working for me” said Pirri. “Much of the success of Harvester is a direct result of the dedication and commitment of my staff.” To start up a company is one thing, but to remain viable in the tough natural food industry, is quite another. Low margins, cut throat competition and too many distributors chasing too few accounts with the same too few products have led to a spate of bankruptcies in recent years.

Pirri realized that to make Harvester a force in the business and get people to shop in health food stores, he had to reach the 95 percent who don’t shop there. In short, he had to develop a strategy to make health foods acceptable to mass market, and to do this, he resolved to take health food mainstream. Key products were already on the shelves of major supermarkets and drug stores. With or without me my competitors products were appearing in the mass market, so that’s where I had to be,” he said.

Unlike his competitors however, who were content to serve the market piecemeal, providing products that got lost in the overall grocery mix, Pirri realized that he had to entice people to buy health foods, they would have to be sold on the natural health foods concept. Not a difficult sell, considering the tremendous interest in “food as medicine” in the US market, where surveys show 86 percent of consumers believe that foods contain naturally occurring disease-preventing and health-promoting substances.

The market and timing was right, an aging population concerned with having a healthy golden age: well-read consumers who read labels and worry about additives and preservatives: wellness affectionados into self-care as the best safeguard against disease: stressed out yuppies who want a healthy diet but don’t have time to cook; fitness buffs who want fat free and energy for work-outs; vegetarians who espose meatless and cruelty-free and environmentalists concerned with sustainable agriculture and recycling.

What Pirri’s years of expertise as a retailer taught him was that giving the public what they want is always good business sense, and making it easy for them to purchase translates into increased sales.

If pharmacies staffed by a pharmacist are found in a supermarket, why not health food stores staffed by knowledgeable people? The concept of natural products departments was ingenious, particularly in light of US trends, fortified foods and nutricuticals.

As the third generation of the Pirri family in the food business, Vito was well known in the grocery trade. Grocery is an alien world entirely for natural health foods. While the average health food store-owner struggles with over 100 suppliers, grocers only deal with 30-35 suppliers on average. Grocery people do not have the time to shop for the best deal or source out different suppliers for one-time specials, they believe in long term commitments as the path to cutting down their headaches and their costs.

Fortino”s isn’t the only chain which has used Pirri’s talent and energy. To date, he has worked with IGA/Oshawa Group, A&P, Loblaws, Zehrs, Pharma Plus, Shoppers Drug Mart, GNC Canada and Nutrition House to name a few. He provides natural food sets and is guiding Harvester and his competitors into a market, which is virgin territory for health food.

With the added advantage to test products in the family business, Pirri’s Natural Foods in St. Catharines, run by his wife Sue and son Frank. There they can tell what will fly and what won’t, a definite plus in an industry where new products comprise 30 percent of the stock on average. While the incursion into the mass market by natural products suppliers may be anathema to some health food retailers who will not purchase products from suppliers who sell there, times are a-changing and call for a different strategy. Not only major chains, such as GNC are now in Canada, nationally recognized brands of natural foods and supplements are already in the mass market. If the trend in pharmacy the past 10-years is any indication, natural health products will go the same route, only the well-established independents that provide exceptional service and extensive product selection will survive. Those companies who limit themselves serving natural food stores will loose ground to their competitors. Working smarter with suppliers may be the best marketing strategy.

“What I have observed at my store in St. Catharines, which is situated near a Commisso’s Food Market and Herbie’s Discount Drugs---both of which carry natural products, is that business has increased,” said Pirri.

“What I have found is that people who shop in these locations become exposed to natural health products and eventually some will come into the store because we carry a greater selection and have the product knowledge. If only 20 percent 0f the 95 percent who shop grocery come into a health food store, than those are new customers we can help,” he said.