Retailing: Not Just One of the Bunch 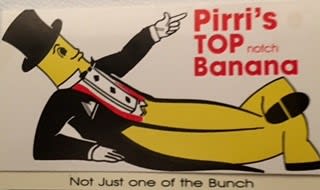 ST. CATHARINES, ONTARIO - A reclining banana dressed formally in tuxedo and top hat points to the entrance of Pirri's Top Notch Banana. With colorful cloths and cartoon characters displayed in the windows one might not recognize this store as one of the newest of three complete natural food stores owned by Vito Pirri here in Canada.

The store opened in May 1985. Besides offering extensive selections of bulk foods, vitamins and body care, it also carries an exclusive line of colorful designer children's clothes, called "Peanut Power".

"Our store is located in a strip shopping plaza, and the children's clothes attract customers who shop in other clothing stores in the strip", says Pirri. "That and the comical Mr. Banana and Mr. Peanut painted on the windows per 6 day week. pull children, parents and the elderly alike into the store. The idea of the Top Notch Banana was to get away from the traditional image of a natural foods store, says Pirri. "In Canada, only five percent of the population shop in  natural foods stores," he says.

With a different name we wanted to create a different identity to attract customers in the store. Top Notch Banana is averaging 1,100 customers per six day week, with sales averaging over $6,000 per week. Projected annual sales for the store are $300,000 for the first year, and the overall gross profit margin is estimated at 48%.

"We have high margins because there is no competition in our area," says Pirri. "In Toronto the margin would be 10% less."

The three Pirri stores serve St. Catharines, the hub of the Niagara region in Ontario. "We are located a half hour from Buffalo, N.Y., 12 minuets from the United States and Canada border, and only one hour from Toronto, " says Pirri.

The Market Place is set up like an indoor shopping concourse, says Pirri. The 14 boutiques have different names and are decorated in an all-wood motif.

They range from "Basic Ingredients," containing cooking and baking ingredient supplies, to "Wholesome Delights", a grain and cereal department. Other boutiques include a macrobiotic and gluten-free Center, nutritional supplements, all-natural body are, herbs and spices and a department featuring beans, pasta and soup bases. Projected 1986 sales for the Marketplace are estimated to be $16,000 to $17,000 per week, according to Pirri. The customer count is estimated at 2,000 per week, and gross margin at the store is 38%. "We expect to annually gross $1 million a year in produce alone with this facility. The store is staffed with full-time employees in vitamins, body care and produce, according to Pirri.

"We have part-time people working in other departments" he says.

"For security we have monitor cameras throughout the store", Pirri continues. "With one entrance and one checkout area, we can monitor everyone coming in and out of the store"