The Grass is Always Greener on His Lawn 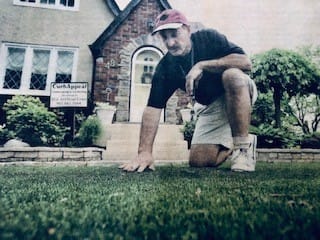 With Vito's move to landscaping, the articles kept coming - this on artificial turf was published in the St. Catharines Standard on May 28, 2009, written by Tiffany Mayer.

Vito Pirri's is enough to make grass fanatics green with envy. It's Thick, Lush, Boasts a healthy shade of emerald. It's clipped to the perfect height, the precise lines of each pass of the mower still visible. And there's no trace of a weed anywhere. If it sounds to good to be true in this era of pesticide bans, it is. Pirri's lawn is fake.

The landscaper recently turfed his grass for artificial sod that, save for a business sign proclaiming it so, looks and feels very real. "you should feel it with bare feet." Pirri said as he admired his pristine front lawn at his Glenridge Avenue home.

Part the polyethylene blades and there even appears to be soil between them. Really it's beading made of recycled rubber, but it adds a bounce that only the healthiest of natural lawns can mimic.

Pirri has been selling and installing artificial grass for the aptly named Stoney Creek company Artificial Grass Landscaping for the past two years. Equipped with a long list of customers and photo albums filled with shots of brown waste-lands, transformed into perfect green-spaces.. Demand for phoney greenery is growing.

'I'd get customers calling saying, 'what can I do about weeds? All the good products are off the market now. The green products aren't up to speed yet, Pirri said.

If you have a beautiful home and add so much beauty to it but can't do anything to your lawn...where do you go? This is the route of the future. For every ban by the Ontario government, there is an answer.

Other than the rare pas with a mechanized broom to liven it up-the reason for the lawnmower-like lines in Pirri's front yard- artificial grass seems to thrive on being ignored.

It can also take a lot of abuse. Artificial grass was installed at Glenridge Hill Child Care last year after real grass and weed-chips weren't cutting it on the toddler and infant playground at the St. Catharines day care.

Gone are the days of re-sodding every two years because of the ruddy ruts children would wear into the real stuff. The mulch is also safer these days.

"Obviously, for an infant playground (with artificial grass), they're not eating the wood-chips," supervisor Brandie Camilleri said.

"If I could afford it, I'd put it in at my house" Camilleri added. Artificial grass does cost some green. Pirri's postage stamp front lawn cost him more than $4,000. The going rate is between $12. to $15. per square-foot depending whether it comes with the rubber infill.

Though there is an eight-year warranty, Pirri said it can last upwards of 20 years depending on use. Considering he's done away with his lawnmower, sprinkler system, fertilizer and grass seed, he's confident his artificial grass will one day pay for itself in spades.

The dried out patch of real sod languishing in another part of the day care's yard only affirms the merits of artificial grass. "It's green summer or winter, we haven't done anything to it," Barlow said.

Jeff Claydon, landscape architect with the city, had the fake turf installed two years ago after scrutinizing it's safety, playability, accessibility and doing reference checks. It fit with the backyard garden theme of the park, he said, and kept skateboarders, who might be tempted to use the playground to practice their tricks, at bay.

"I'm really impressed with it. It's worked exactly the way we hoped, " Claydon said. " The kids roll around on it and love it."