It's Natural: A New Concept Of An Old Idea 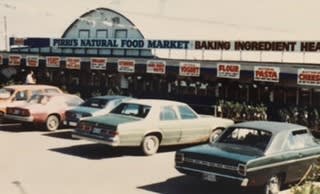 An article about Pirri's Natural Food Market, written by Dan McMaster of the Brampton Times in February 1981.

A new concept of an old idea and bargain anyway you look at it, best describes Pirri’s Natural Food Market according to Vito Pirri, store-owner.

“Totally eliminating pre-packaging costs in a unique concept in the food industry,” says Pirri. “Added to this is a old style idea of working with the customers, not against them. We’ve created a warm, personable atmosphere with customers that can only be achieved when you’re an independent business.”

Pirri’s is located one mile north of HWY 401 on Highway 10 and the past four years has changed from a fruit market into a store offering over 3,600 items from dog food to meat and cosmetics.

“When I named the store natural food’s market, I didn’t mean to imply we just sold natural foods,“ says Pirri. I mean that we offer a more natural way of purchasing food while at the same time saving the customer money.”

In a selling area of 8,000 square feet, Pirri has utilized every square inch, offering products that can’t be bought, all in the same store, anywhere else.

“We offer 55 different kinds of pasta, over 150 varieties of nut and nut mixes, 70 different fruit drinks and 40 different flavours of jelly beans,” says Pirri.”This is the type of diversity we offer and we’re constantly expanding our line of goods.”

In order to facilitate the variety of goods Pirri offers, and maintain the quantity he demands for his customers, Pirri purchases goods from over 300 different suppliers.

“We import goods from around the world, “ says Pirri, “and if a customer asks for something I don’t have, I’ll do my best to get it for them.”

Meat is shipped in from outside Alliston, where the cattle are raised organically and no additives are added to the meat after slaughter. Goat’s milk is brought in from the London area, rice from India and fruit and vegetables from every country imaginable.

“By accident, the staff compliments this international food selection” says Pirri. “Among the staff members there are five different languages spoken, including Chinese, Italian, Dutch and English.

Although Pirri’s has been a natural food market for four years now, Pirri states he is having problems dispelling the myth he is running a fruit market with Brampton residents.

“The people of Brampton can’t seem to get rid of the idea we’re a fruit market, we haven’t been for a long time,” says Pirri. “As a result most of my business comes from Toronto and Mississauga.”

Pirri has found, from talking to his customers, they appreciate the fact they can see what they’re buying and purchase the exact quantity they desire.

“I’ll sell my goods in whatever volume my customers wish,” says Pirri. “This way customers can do their shopping for two or three weeks at a time.”

To make shopping more enjoyable and informative, customers can make their own peanut butter, choose from a variety of ice-creams and fill a container or learn how to make soup from bulk mixes.

“A person can purchase a soup mix here that is exactly the same as those used in many restaurants,” says Pirri. And the recipe for preparing is on the container.”

For commuters Pirri’s is now a convenient stop on the way home from work with the new Mississauga Transit route 19, which stops directly in front of the store.