Pirri's From Start Up to Success in 14 Months 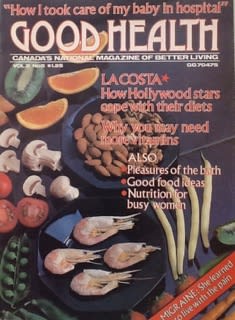 “It’s neat, clean, the prices are good and everyone is so helpful”   “I’m excited about it, I won’t shop anywhere else.”

In just 14 months, Vito Pirri, 31 and former employee of his, George Chow, 29, have made Pirri’s a household name in St. Catharines and the surrounding area, achieved over $1.5 million in sales, earned the respect of their suppliers and had their landlord offer to build an addition onto their store to keep them from moving.


The red canopies over stores in the K-Mart Plaza, in

built a successful business by meeting their customers’ needs.

In the natural foods and baking ingredient sections of Pirris, hundreds of customers a day fill shopping baskets from choosing from more than 6,000 items from 40 countries.

Controlling yourself is the most difficult part of the shopping experience. When you can buy as little as a teaspoon of vanilla extract, a few pieces of spinach spaghetti, a scoop of honey sweetened ice cream, stock up on pounds of one of 30 kinds of flour, treat yourself to some exotic forest honey from pine, or just fill regular shopping cart needs with some basmati brown rice or cereals and tea--- well, you’re glad the baskets aren’t bigger.

“Health food suppliers have told us” says Vito, “that we have the most complete product line in Canada.

We have from $165,000 to $225,000 worth of stock here, including hundreds of books on health, diet and fitness, every natural cosmetic and facial cream you can think of, every grocery item available and all major brands of natural vitamins. Nobody buys as much as we do. I don’t like to sound like I’m bragging, but were very excited about this place.”

Because they carry hundreds of grocery products not found in conventional nutrition centres or health food stores. Pirri’s appeal is more universal. There is something for everyone here, those who usually shop at a major supermarket, people on special diets, those looking for ethnic foods, as well as the already converted health or natural food shopper.

Vito & George are always pleased when someone comes back and tells them that a product or book they’ve recommended has really helped them.

“And we will go to any lengths to get something for a customer,” says Vito.

Although Pirri’s advertises aggressively in the Niagara region on radio and in print, and has the support of local hospitals and fitness organizations, Wally Shubat, of CKTB radio in St. Catharines, believes that Pirri’s clientele is now building through word of mouth.

“People come in and say the advertising is true, they’re not being misled or disappointed and they relate their experiences to others. People react really well to the personal service and are excited by the products they find, but they are very price conscious and if the savings weren’t genuine, they wouldn’t keep coming back,” Says Wally.

Many customers comment on the freshness of the products. The reason, according to Vito, is because everything sells. “If it doesn’t, I’m not doing my job.”

There is even a market here for products usually found in specialty stores in large cities---like chocolate pizzas and escargots, blueberry blossom honey and rainbow coconut.

Since Vito and George both grew up in the produce business and because it is a logical partner to a natural food store, it follows that they would extend their red awning trademark to include a fruit and vegetable market right next door on their strip plaza.

In the late spring this year, after filling the store with hanging plants, photographs of luscious strawberries, and apples and stocking it full of fresh fruit and vegetables, Harvest Caravan opened for business.

Vito and George oversee the business, but are too busy to run it on a day-to-day basis. However its still in the family. Vito sister Roseanne Santo, her husband Frank, her sister-in-law Silvia Trigiani and her husband Phil, all in their 20’s, operate the store.

Vito believes it’s the only fancy, high quality fruit store in the Niagara region; certainly it’s the only one with a chandelier.

It sounds very unlike the produce stores George worked since he was 13 and Vito lived as a child, where “he would fall asleep on the sacs of potatoes & corn.”

Vito’s family started in the produce business in the north end of Toronto in the horse and buggy days at the turn of the century. In the 1930’s they moved to the east end on the Danforth Ave and in 1951 opened Pirri’s California Fruit Market in the west end of the city and others in Scarborough and Markham.

As children, Vito and George met at the Toronto’s wholesale food terminal. Vito also met his wife Susan there. They now have 2 young children, Frankie and Sabrina, and are expecting a third child soon.

George’s family eventually sold their business and he entered the University of Toronto, where he earned a degree in economics and political science. After a brief change in direction George got married and was back in the fruit and vegetable business with his father-in-law.

When George and his wife divorced, he went to work for A.E. Price Fine Foods, a gourmet food store in downtown Toronto. He set up and ran the produce section of the store until Vito suggested that George come and work for him.

Vito had quit school in grade ten. At 19, he went into partnership with Mike Selbie, who now runs the Greater Canadian Produce Company, which Vito considers the “number-one produce store in the Toronto area.”

Vito and Mike separated after about 10-years, and Vito moved west of Toronto. George worked for him there until Vito would launch his new project.

“We both hated shopping, so we, now partners, wanted to create something that would turn people onto shopping” says George. “It’s great when you see a couple come in, go in different directions and then call to each other to come and see what they’ve found, or hear a man say he couldn’t let his wife in here because she’d go nuts.”

I researched the health food industry in Europe, Canada and the States,” Vito said. “We asked a lot of questions about what was going well, what wasn’t and why, and observed peoples shopping habits.”

Vito and George believe that eastern Canada is underestimating the potential of the health food market. Pirri’s is transforming into a major industry by amalgamating it into the grocery business. They are so encouraged by consumer response they see the operation eventually mushrooming to the size of a major supermarket.

Plans for Pirri’s future sound incredibly ambitious, especially in an economic climate that forces established businesses into bankruptcy every day.

When we opened Pirri’s in St. Catharines, no one could understand why we chose one of the most depressed areas in the country, where so many people are unemployed. Well, it was because of that,” says Vito.“ people, especially here, are looking for a reason ably-priced food alternative.”

In the next four years, Pirri’s plans to cover the entire Niagara region, with two more stores in St. Catharines, three in Niagara Falls, one in Welland, Port Colborne, Thorold, Grimsby, Beamsville and Niagara on the Lake and a 60,000-80,000 sq. ft. retail/wholesale natural foods supermarket in the Burlington area.

“We really can’t see any of these projections not coming together,” says Vito. “we have already trained two managers.”

“Our store manager here, John Grant is only 19-years old. But he’s most competent and does an excellent job,” says George. “This gives us time to plan for future and drum up the proper deals.”

George and Vito, like partners in a good marriage, work well together.

“We fight like cats and dogs sometimes,” says George. Vito smiles: “If someone is looking for something and I’m busy. I point to George and say, “ask my brother.”