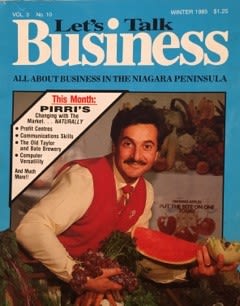 This article appeared in 'Let's Talk Business' in the Winter of 1985. Written by Tom Torrance.

Years from now books will be written about the techniques and strategies of business survival. They will without doubt highlight that the flexibility to change according to changing markets is a key factor to that survival. More than this, these texts will place an importance on foresight and vision. These factors will set a business apart from others as a creator and leader in that change.

To illustrate this through example, the writers of the books will refer to such businesses that demonstrate vision today. One example may be Pirri’s Natural Food Supermarket of St. Catharines, Ontario.

Vito Pirri, the owner of the three Pirri’s outlets points out some of the changes that have added to the success of his business, and the industry, in recent years. He has see it grow from a produce market to a health foods and product specialist and is now working to develop a business that will meet everyone’s needs. To change the image of being strictly a health food, he recently established Pirri’s Top Notch Banana in the Glenridge plaza, which has seen such a positive consumer response. His Bunting road facility has now been expanded and redesigned to further the development of a new image and other changes have been planned for the near future.


Vision is indeed an important factor in business survival. Other key areas are product quality and business experience.

Pirri’s are recognized for its quality products and Vito suggests that at age 34, he has accumulated experience of approximately 80 years.

His grandfather established himself in business in 1918 by selling fresh produce from a horse & buggy. His son’s Frank & Anthony worked with him in the business. Frank (Vito’s father) continued in the produce market line and went on to create one of the first open air produce markets in Toronto. This, according to Vito, was to set the pace for the industry.

In 1968, at age 17, Vito opened his first store in Toronto. It was similar in product and atmosphere to his father’s store, but larger. In 1971 he opened a huge market place in Mississauga.

During the late 1960’s and early 1970’s, there was a growing trend toward health and fitness in North America A good portion of the public was demanding clean, quality products. Vito recognized the need and market potential for natural foods and health products. He became more involved in the field of nutrition and went after the natural food industry. He also set out to create an image for his business that would attract this market.

During the 1970’s, Vito was again looking for something new to offer the customer and stimulate growth in his business. He turned to the experience of an older family member who kept a small store. Through a series of discussions about business trends it became most clear that what he was looking for did not have to be something new. History could repeat itself with equal success. He was reminded of the days when pickles and similar products were sold from a barrel and candy sold by the scoop from jars. Pre-packaged foods came much later. That not so new idea was created.

He discussed his plans with suppliers who agreed to assist in the idea and began offering his products in bulk from bins, barrels and other containers. The consumer can now buy as much or as little as required. Bulk caught on and now represents a multi-million dollar industry. Pirri’s would go on to blend the natural foods concept with bulk foods concept with success.

About five years ago, Vito sold the Mississauga operation and came to St. Catharines with his natural foods concept, his experience, and his vision. His first location here was Pirri’s Natural Food Market at 333 Ontario Street. The following year he opened Pirri’s Marketplace at 210 Bunting Road. This facility has seen much expansion and is now the headquarters of his business.

Vito, with hammer and nails in hand, did much

of the building and expanding on his own.

His wife, Susan, a long time resident of the Niagara area, works with him in the administrative side of the business.

On May 29th, 1985, Vito opened up his 3rd location in St. Catharines which he hoped would change the image of Pirri’s from strictly a heal food outlet. The new facility is located at 224 Glenridge Avenue and is called Pirri’s Top Notch Banana.

The store manager is Sandra Miller who has worked for Pirri’s for some time prior to this opening. The new image has been successful.

Like other Pirri outlets, it also carries a wide variety of natural food products and health care items. These include goat milk products, natural breads, and a full line of natural ice-cream and cones, fruit juices, snack items, a wide range of products for baking, cooking, canning and pickling, and a large variety of flours, pasta coffees and teas. All of these products are either fresh or frozen, natural and, in most cases, available in bulk quantities.

Today’s customer, Vito points out, is more sophisticated than ever before. People are not content to buy a lot of packaging, fillers and additives. This has helped in his business success. He contributes to this more knowledgeable buyer by offering nutrition classes. He is also involved in a series of consumer’s reports for radio.

On Tuesday, October 1, 1985, Vito had the grand opening of his Bunting road facility, “Pirri’s Marketplace”.

Part of the new facility has been sectioned off as 16 small specialty boutiques for the display and selection of many product lines. Each boutique has a name to identify what it carries. These include; Taste buds, Nut Shoppe, Sugar Shack, Body-Up, Natural Today, Wholesome Delights, Food for Thought, Prescription Food Centre, Cookie & Cracker Barrel, Sugar & Spice, Seeds & Things, Basic Ingredients and Little Dairy.

What does Vito Pirri see in the

Future of the Food Industry

He suggests that independents are coming back. Part of this trend can be seen in the number of boutiques that are now taking their place in the business community.

For his own business, Vito has many plans and visions. Those may include an open window pie shop, a bakery and a European style deli.

Things have not changed over the years at Pirri’s. Since day one, Pirri’s have been recognized as the place to go for a complete selection of baking ingredients. It offers 160 different herbs & spices, a variety of sugars, a wide selection of nuts, dried fruits, glazed fruits, and much more. For many, Pirri’s will be the place to shop for Christmas baking items.

What else hasn’t changed in this unique business? It has maintained the experience, quality and vision that have established it as a leader today and will carry it on into the future.