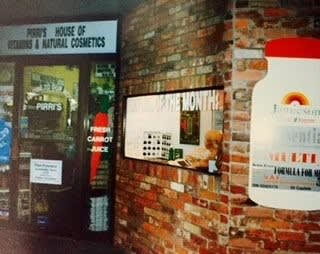 Pirri’s House of Vitamins and Natural Cosmetics in Etobicoke, Ontario is a new venture for family with a 42-year history in foods, but it’s also something more: has a vision for a major natural health franchise system, in both Canada and the United States. Vito Pirri says he will be ready for franchise sales in about six months.

“It takes a certain degree of professionalism,” says Vito. “When I heard that GNC was coming to Canada with 40 stores, I said, ‘that’s great. Open doors, create awareness.’ You see were different than GNC.”

Professionalism was the reason the company had its logo designed by Hartley Strauss of Niagara. The Pirri family business started in 1951, when Vito’s father established a produce market in the Kingsway area of Etobicoke, at the time an outlying suburb of Toronto.

In 1981, after working for his father, Vito opened his own health supermarket in St. Catharines. That store, with a strong emphasis on natural and organic foods, will continue to operate: the Etobicoke store is a different kind of venture.

“We have little or no food items in the House of Vitamins” he points out. “There are soy beverages and Rice D ream to bring people in: we grind our own fresh natural peanut butter and sell pure unpasteurized hone out of a stainless steel keg. But the emphasis here is on all supplements including vitamins and minerals as well as natural & organic cosmetics.”

Another attraction that draws many people is steam-distilled pure water purification system. Pirri sells water distilled on-site at about half the going rate. “and I’m still making a profit!” The Professor Purewater distilling system includes a 300- gallon holding tank. It costs $3.29 to refill customer’s 5-gallon containers.

The new 1,400 sq. ft. store also features a fresh juice bar and de-alcoholised wine bar to attract people walking by. It sells 20 different fruit and vegetable juices that can be mixed or sold separately. They even juice fresh carrot juice, around 400 pounds / week.

Vito Pirri’s stock of supplements includes representation from “99.9% of vitamin companies in Canada… and certain products are available to us through the U.S. that aren’t otherwise available in Canada.”

Stacking baskets for vitamins create a feature aisle of 90 items that Vito purchases in gross lots, priced very reasonably… we work with our buying discounts, and pass the savings on to our customers.

Other aisles of vitamins in the store are identified by company names.

Dispensing encapsulating machine of Frontier bulk herbs are located near the front of the store next to the Holistic Dispensary.

That’s part of the innovation resulting from Vito’s market research, which included travels around Europe and U.S, checking out what works in today’s market.

‘This is a depot for information and products,” he says. Our focus are to make products available to customers…and give the customer the information and service the need to make the right choices.”

The service includes a library of books on nutrition, herbal remedies etc., comprising about 160 titles—and they will order books they don’t have upon request.

The model store for future franchises include about $225,000 of inventory, and The Nutra-Health computerized data system, Health Notes Online.

Pirri says by the time the franchises are ready to open in six or eight months, they’ll have hired people with backgrounds in herbalism, homeopathy, and naturopathy to add professionalism to the information system.

Right now the model store operates with five people. Vito and his wife Sue, plus 18-year old son Frank and 16-year old daughter Sabrina, both graduates of Ridley College. Franks specialty is in sports nutrition, and Sabrina’s is customer relations.