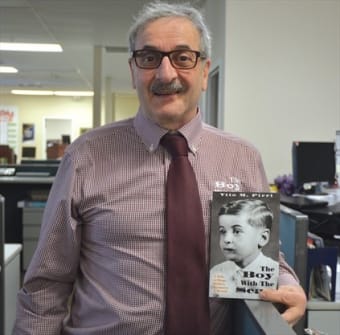 Launching 'The Boy With the Scar' by Vito M. Pirri has been fun and we're certainly enjoying the attention.

Now that I have books in hand and word is getting out that The Boy with the Scar is available, interview requests have been coming in along with public book signing events as well. I am so looking forward to the events.

Recently I was interviewed by Tim Denis on iHeartRADIO -- have a listen here:

And a great article by Richard Hutton of the Fort Erie Post:

After a rough start, life has been good for Vito Pirri

Vito Pirri had an opportunity to be in on the ground floor of Whole Foods' entry into the Canadian market.

So what did the longtime entrepreneur in the food industry do? He turned it down.

“I was at the stage where I had gotten my green card and everything,” Pirri said.

The opportunity was just one of many that have come into Pirri’s orbit over his life. Not bad for a kid who was picked on for his physical appearance, after a traffic accident left him with a scar on his face. He’s put his life story down on paper, resulting in the book "The Boy With The Scar," which documents the challenges he faced in his life and his success in business.

Vito Pirri, who made a name for himself with his natural and bulk food businesses in Niagara and beyond, has written a book about his life. "The Boy With The Scar" tells his story, and also offers advice to today's entrepreneurs. - Richard Hutton/Torstar